Will Loveland
Projects
About 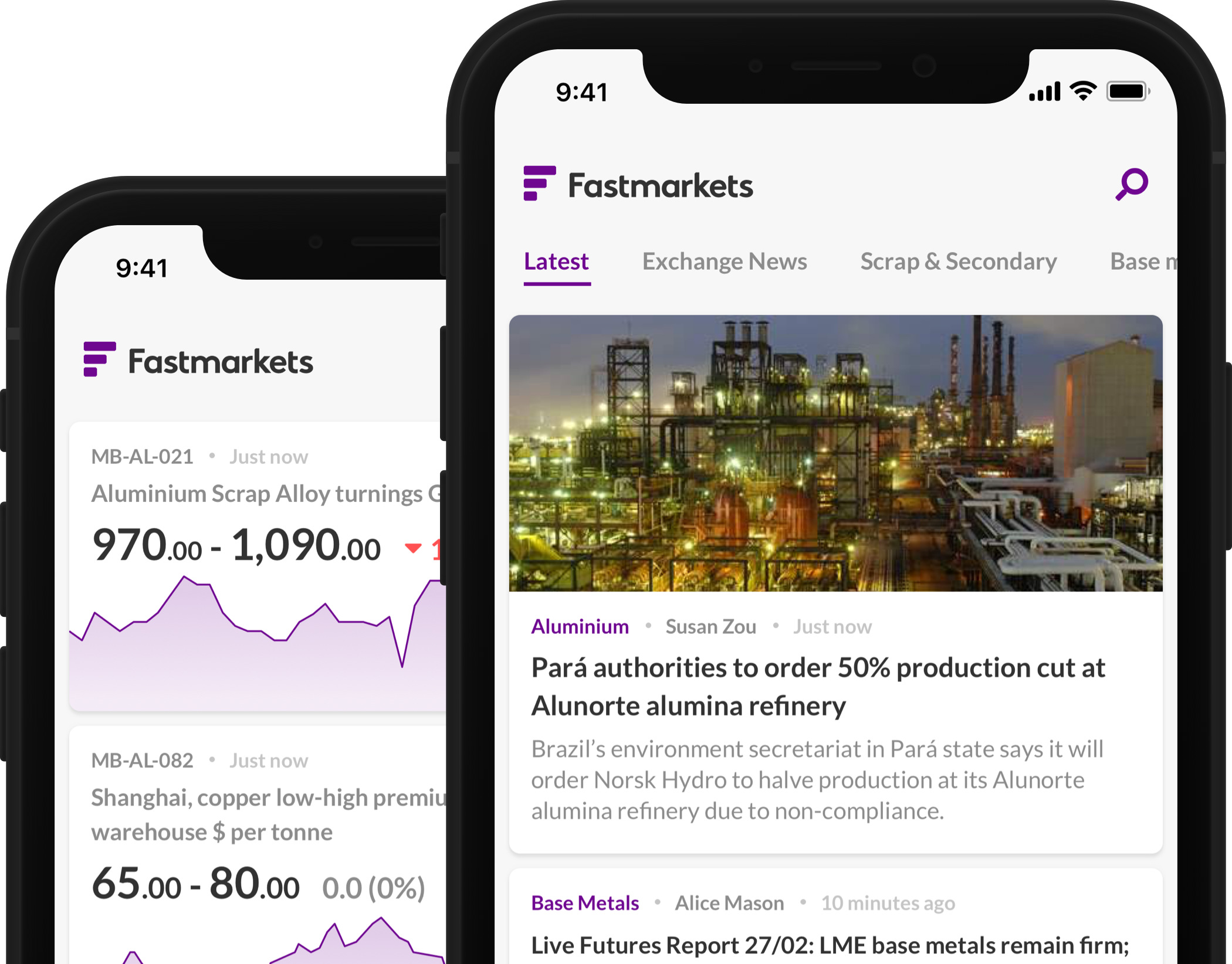 My Role
Lead product designer
Project Length
18 month engagement
Team Size
3 Designers
Live Site
fastmarkets.com
Fastmarkets have over 130 years of specialist commodity expertise and aims to be the worlds leading and most trusted data provider. Their unmatched product breadth and geographic reach allows them to offer the most accurate and trusted commodity prices and insights for those involved in the buying, selling and trading of commodities.
The Challenge
After acquiring a series of commodity news and pricing applications the group was part way through a branding and platform exercise which aimed to unify all their offerings under a single brand and application. The ultimate project aim was to provide a platform which could be tailored to each customer's specific needs whether it be: 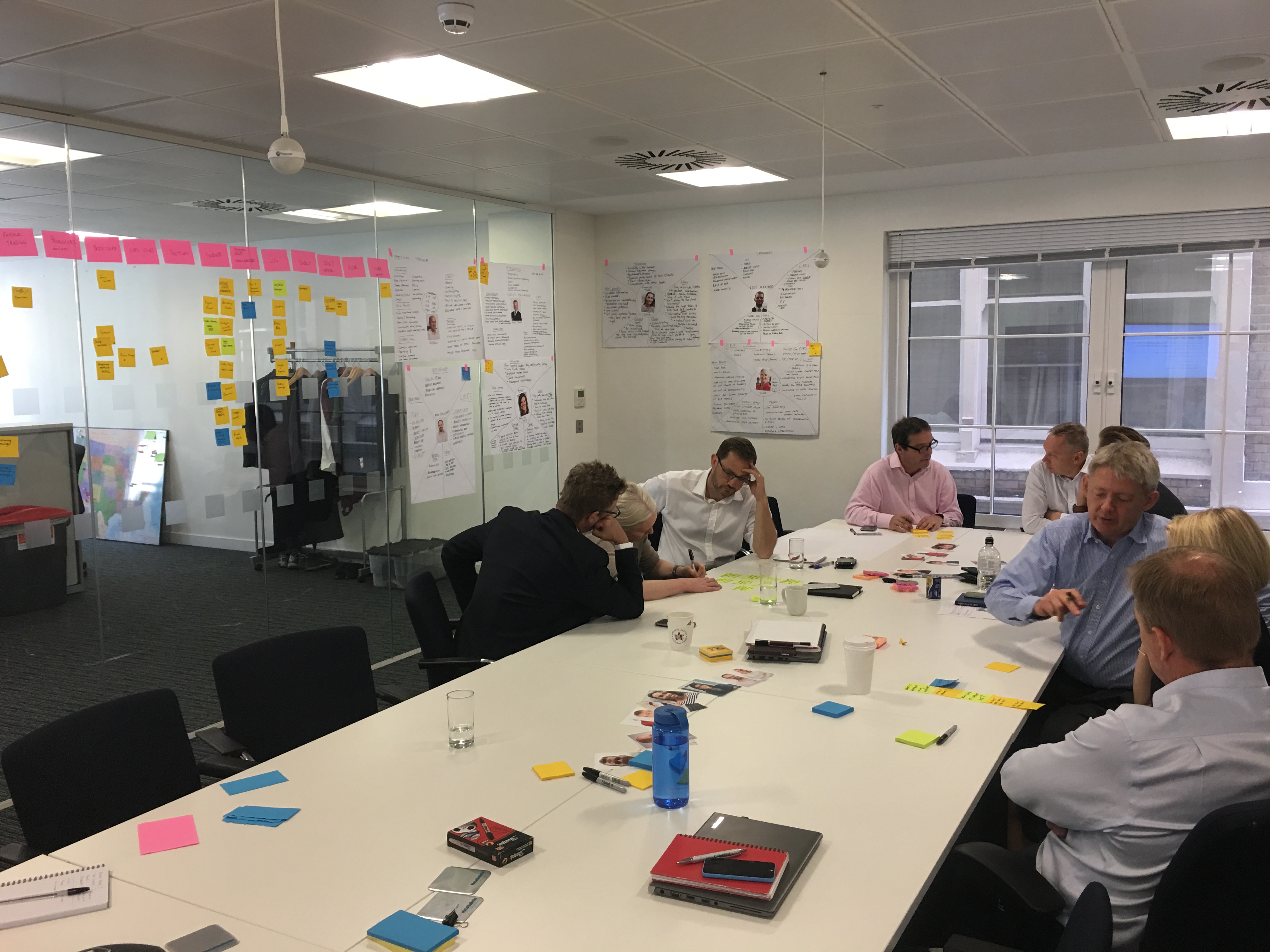 Group workshops with stakeholders.
Discovery
The project began with stakeholder workshops with products teams of each individual group product. The aim was to establish how each product’s users’ and priorities differed in order to identify and establish a workable MVP. Once the outputs of each workshop were collated and aggregated, we started to identify some common themes. The range of user roles and types was vast and varied, as such there would need to be some form of customisation. User’s could vary from large investment bankers operating on 6 screen trading setups, to mobile scrap dealers accessing the platform via their smartphone. User’s are global, their location and geographical area of interest could differ from day-to-day, as such there would need to be a degree of localisation built into the platform. The interpretation of datasets also variety hugely depending upon role and sector, using our earlier example a trader might want to see pricing data over time in chart to identify trends, conversely a scrap dealer might only be interested in today's price rather than historic trends.

Defining user flows within the native iOS application.
Design & Iteration
After completing the round of discovery workshops, a separate research consultancy had completed discovery research into the groups user base. We were provided access to the documents which enabled us to counterbalance the user research findings with the workshops business priorities. Upon agreeing a direction and priority we began designing, this started with low fidelity iteration and flows, quickly iterating through approaches with product managers.

This eventually progressed into higher fidelity design mockups and prototypes which could be validated with users’. As the group was undergoing a major rebranding exercise, we were required to work closely and flexibly with an external branding agency, adjusting their outputs as necessary for digital content. Remote user testing sessions were used to gauge feature design direction, taking on feedback and adjusting as necessary. Once validated designs were spec’ed and passed to development for implementation. Working closely with developers resulted in several bugs and missed edge cases being resolved resulting in a swift and efficient feature development. 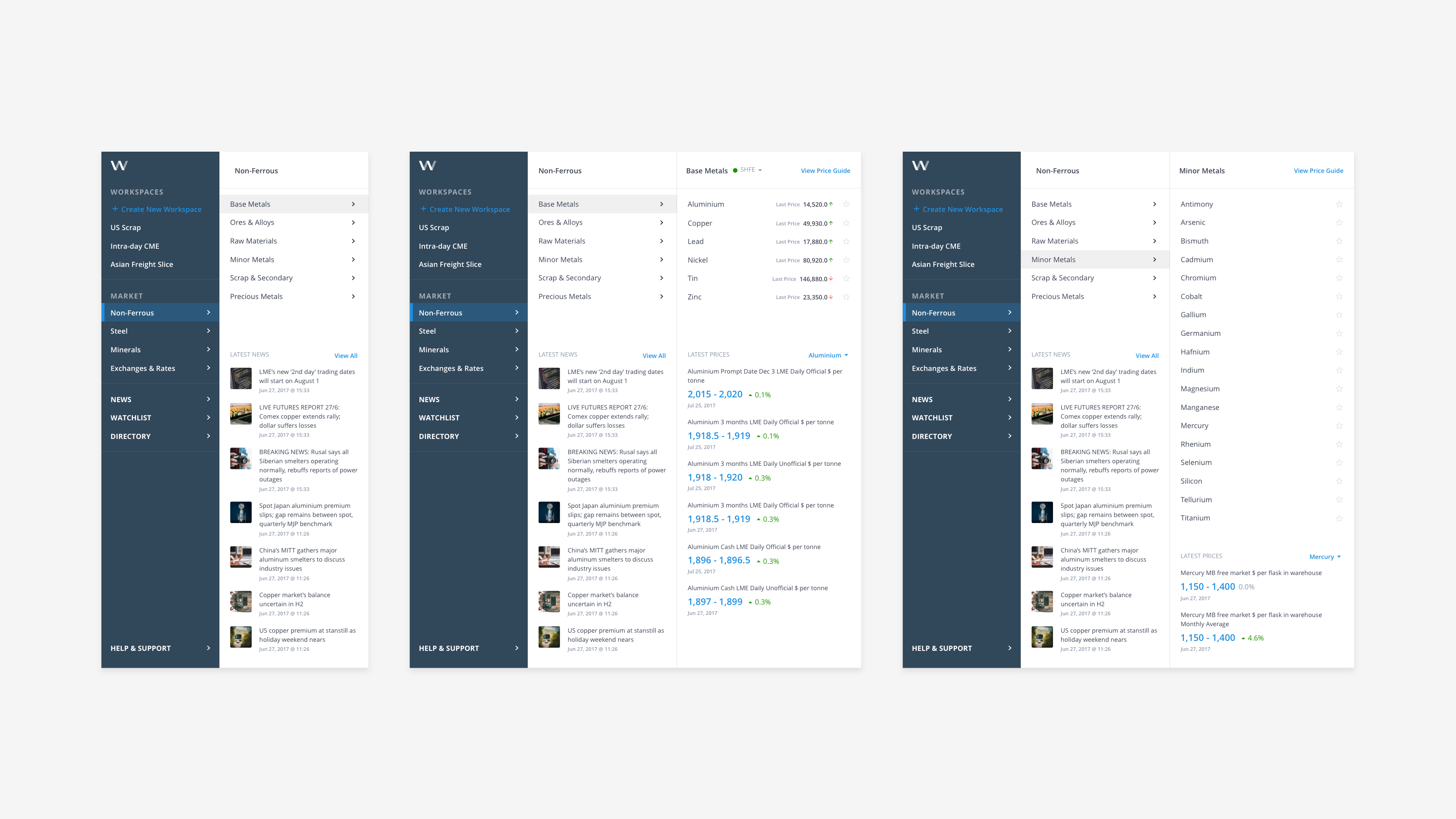 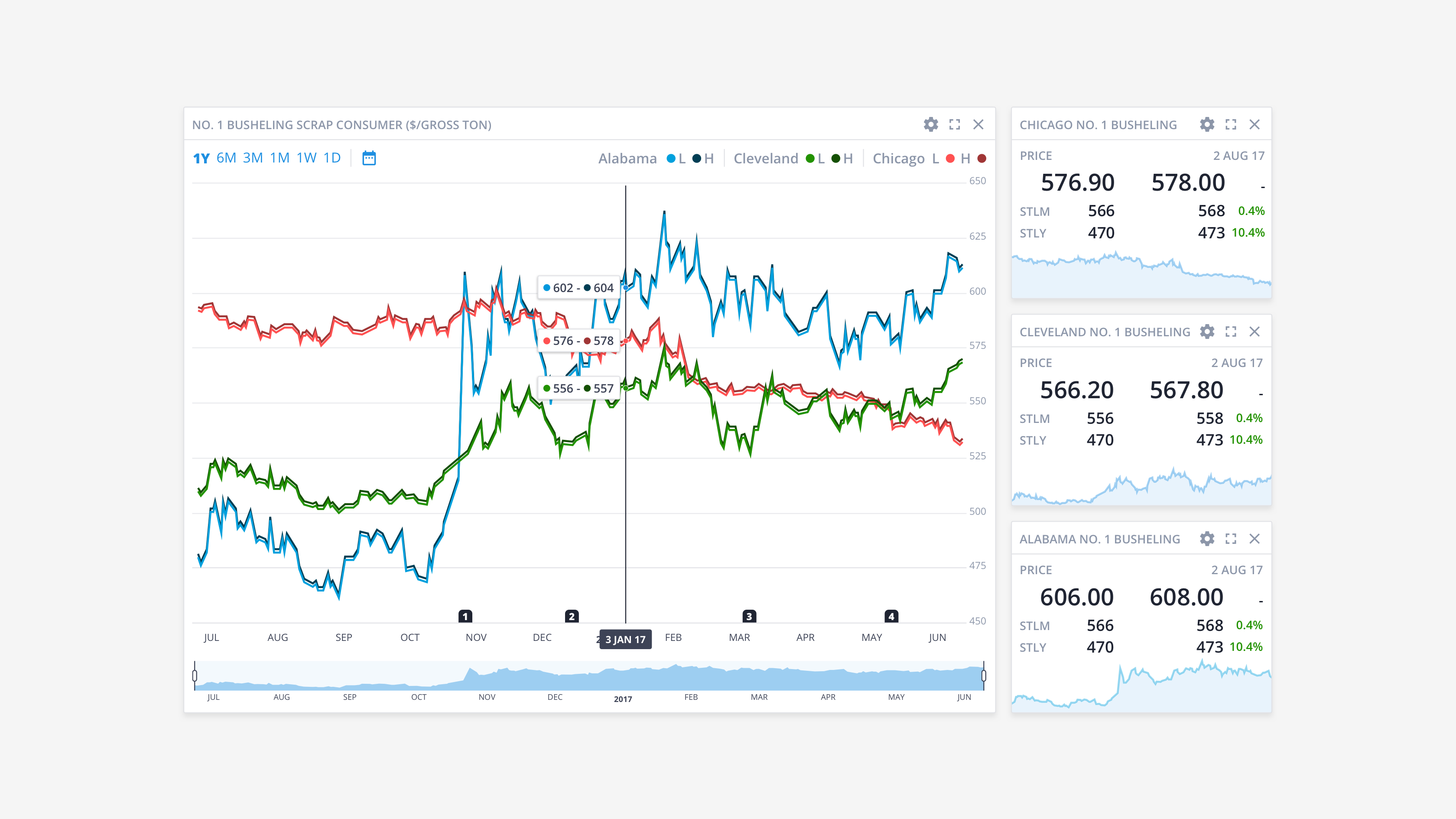 Exploring pricing styles in various different sizes.
Validate
Once a realistic development environment had been achieved, we were able to conduct more realistic user testing. Users were able to interact with the product viewing live, realistic data. Scenario testing covering the application’s core user journeys enabled us to further refine the application.

GIF of Principle prototype created for user testing sessions.
The Result
After 18 months of work the product was initially released as a native desktop application and responsive web product as this targeted FastMarket’s highest value and largest user base. The product was received well by the vast majority of user’s, several bugs were logged and worked on! A few months after the native iOS and Android applications were released, enabling all users to review commodity prices and news updates on the go. The aim for the project at this stage was to continue to integrate the groups other, smaller applications into the unified platform. At this stage however the client had managed to assemble an internal design team, which was now assuming control of the product. A brief handover period was scheduled whilst the teams work transitioned client side.

The web and desktop applications enabled users' to create custom workspaces, where 'widgets' could be added, resized and reorder as necessary. Prices and news widgets could be viewed if differing ways (charts, tables, etc) depending upon their role and preference. The native application was much more refined in approach, acting as a price tracker. Prices which were favourited or added to a workspace were automatically imported and added to the app's price page. Some images of the product can be seen below. 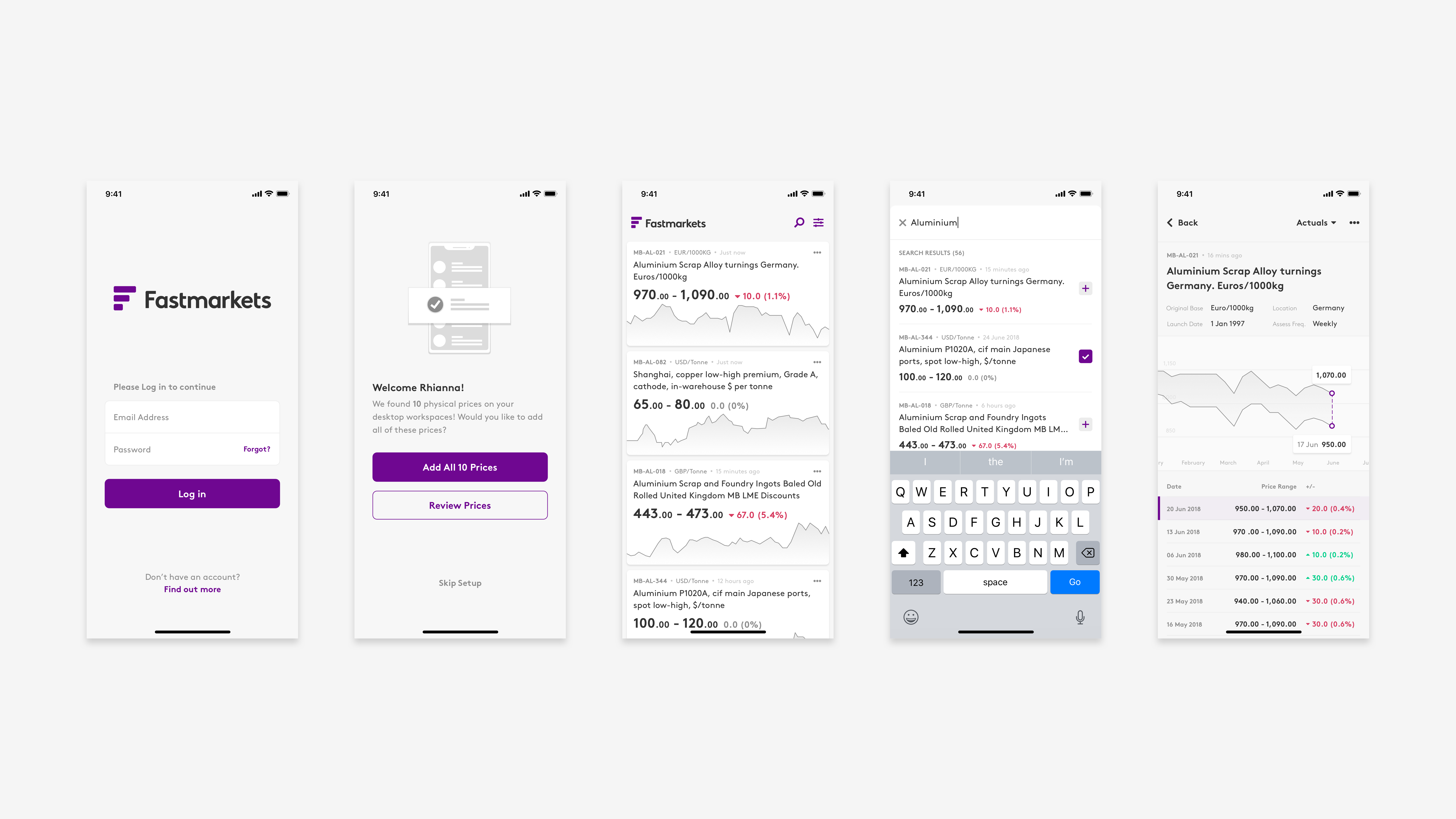 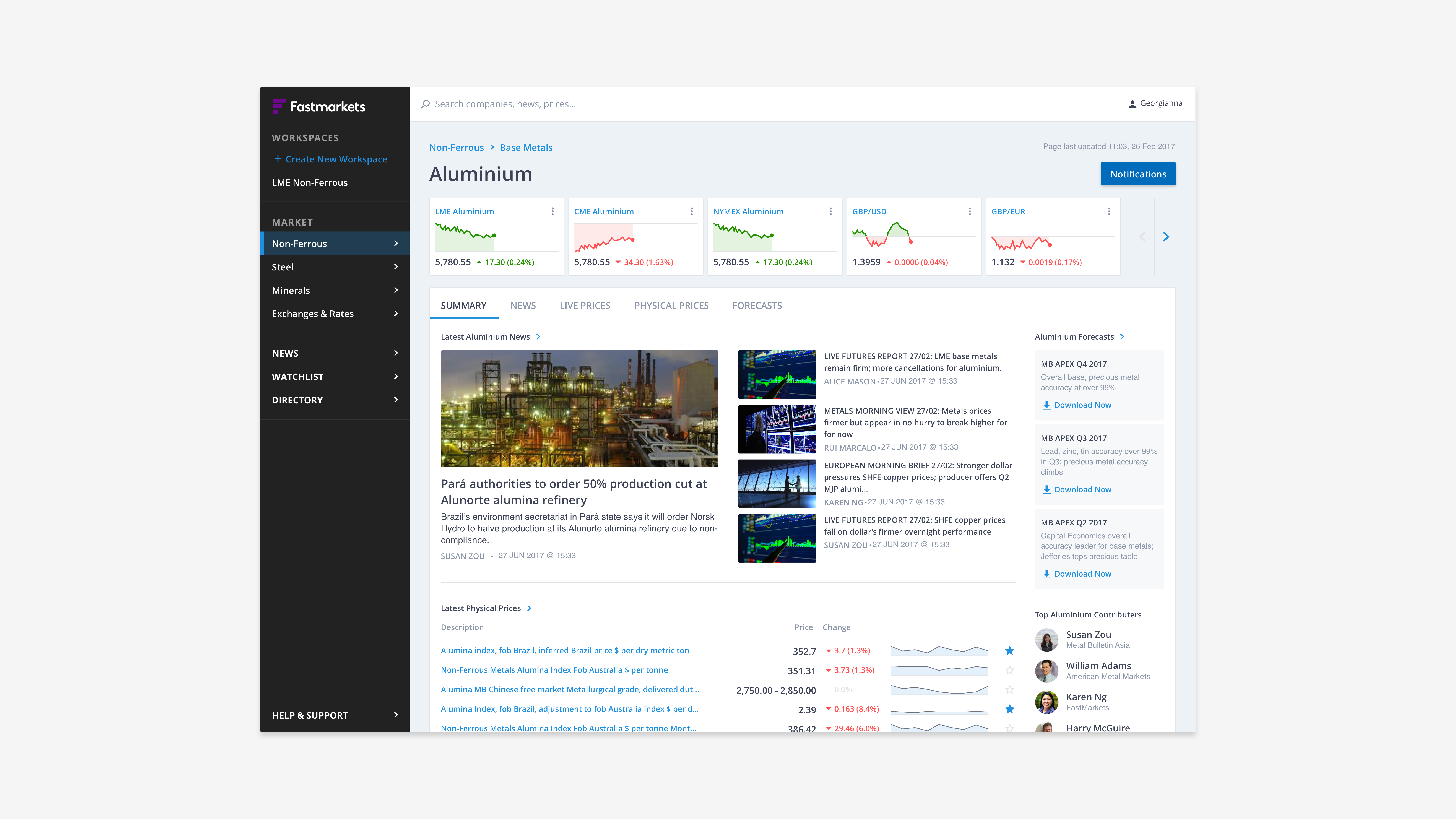 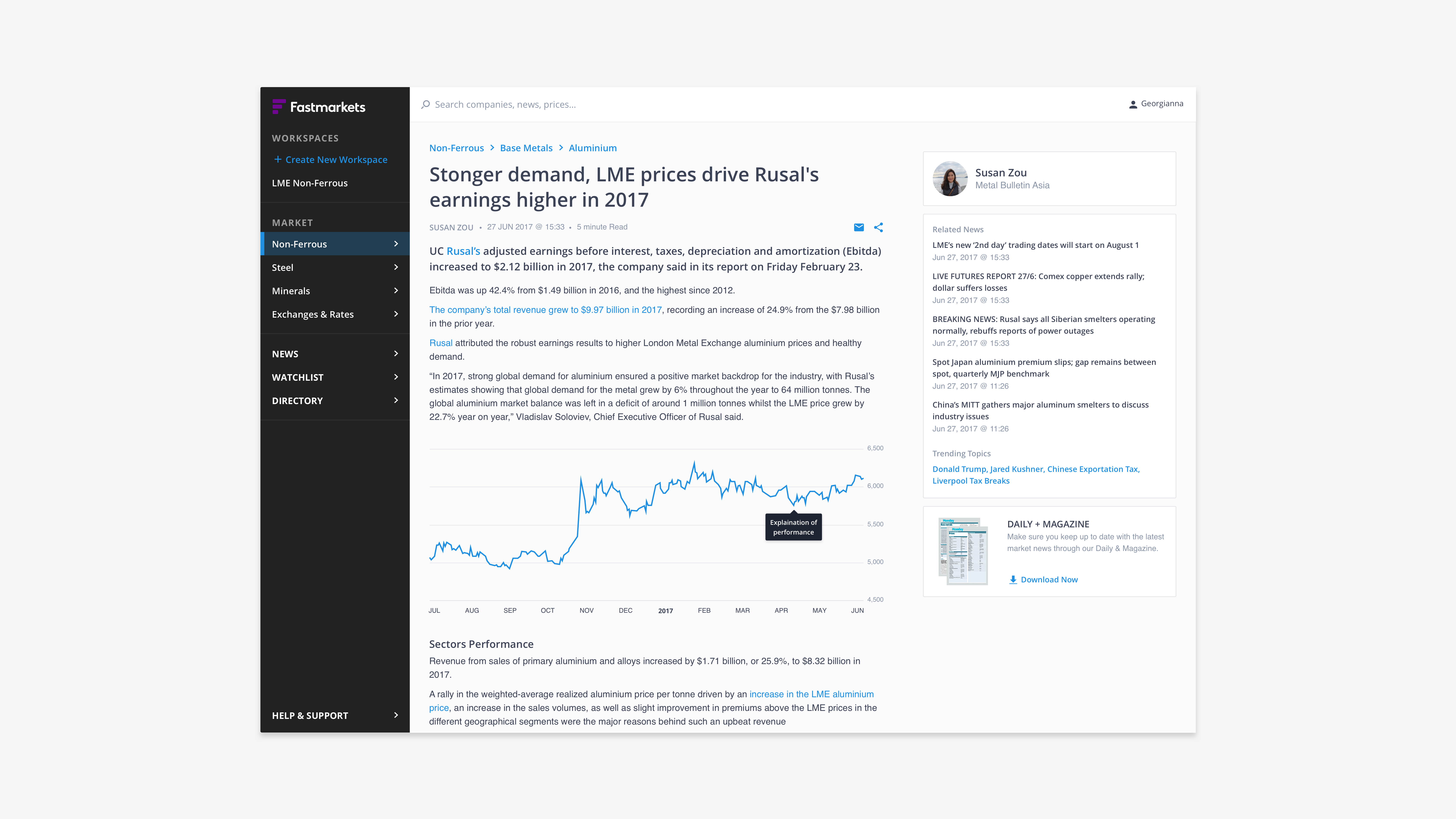 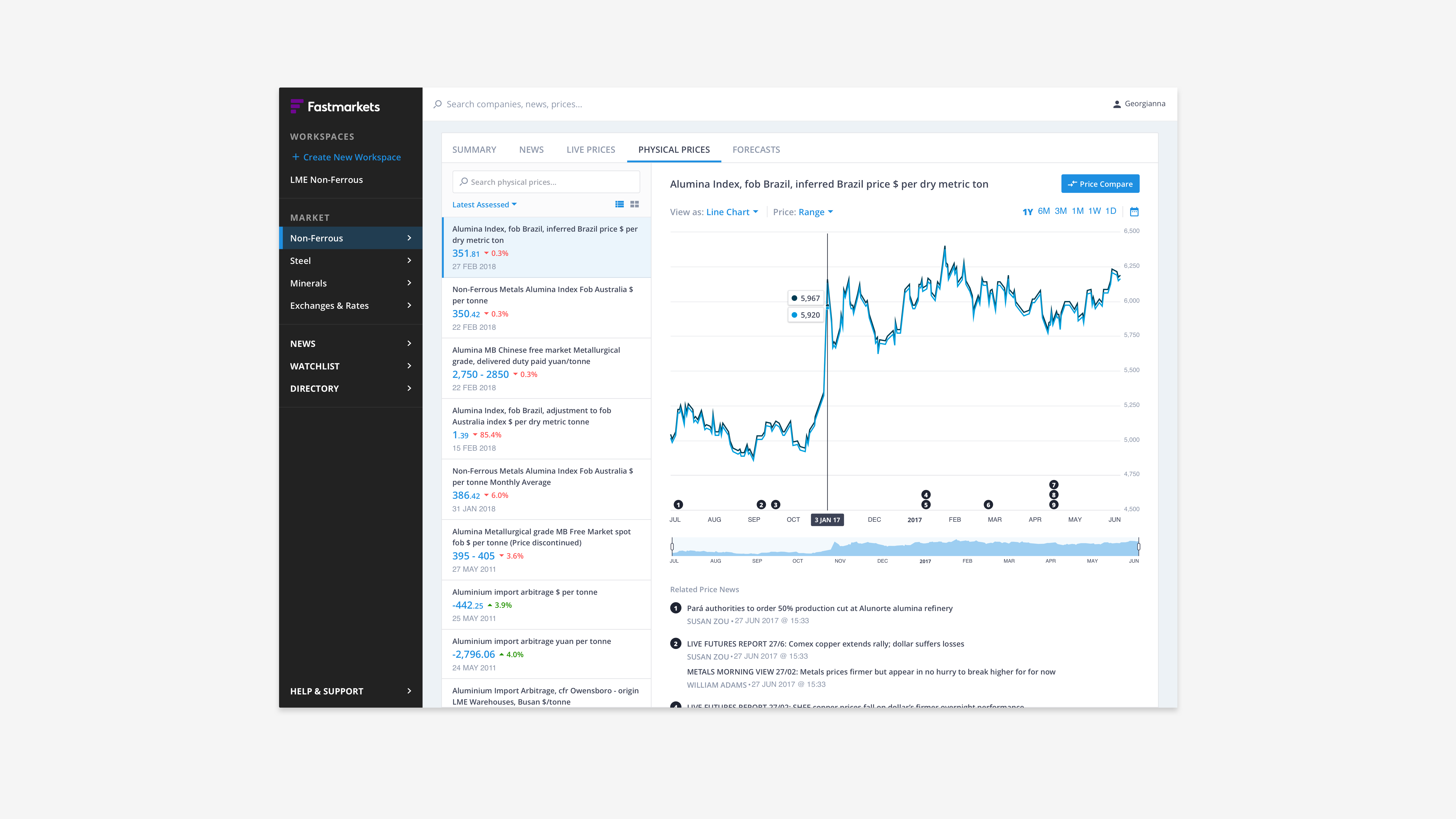 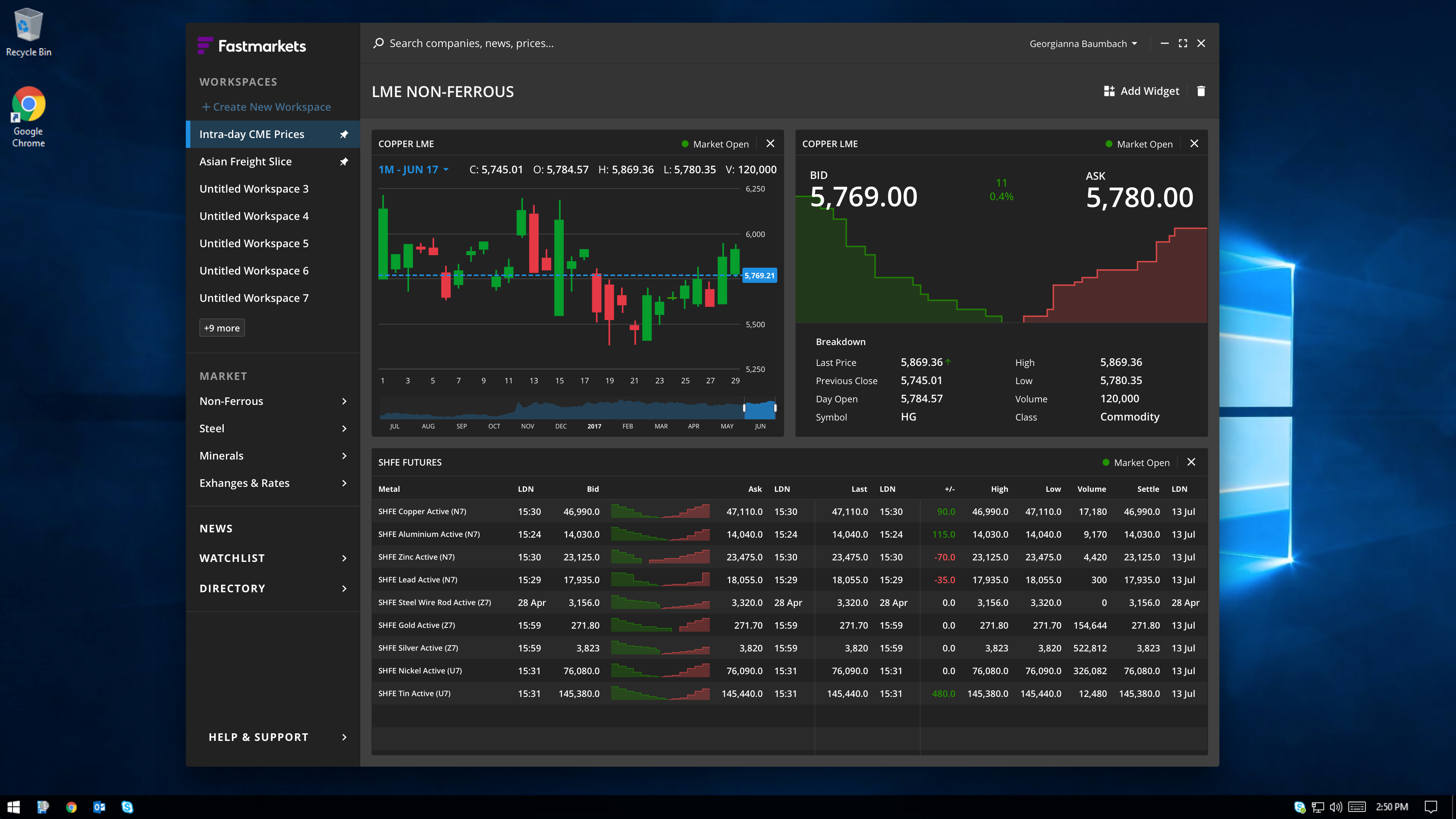 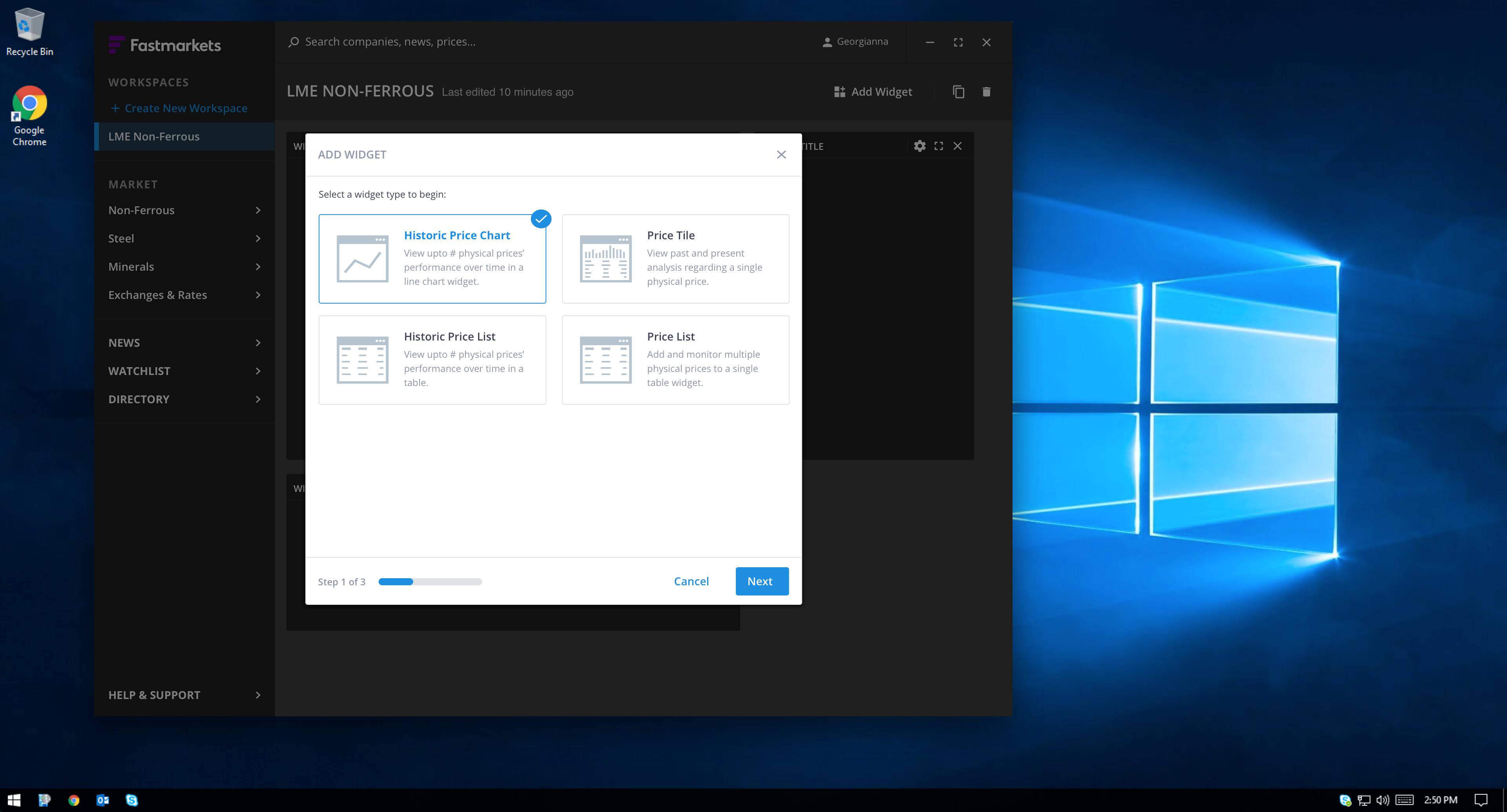 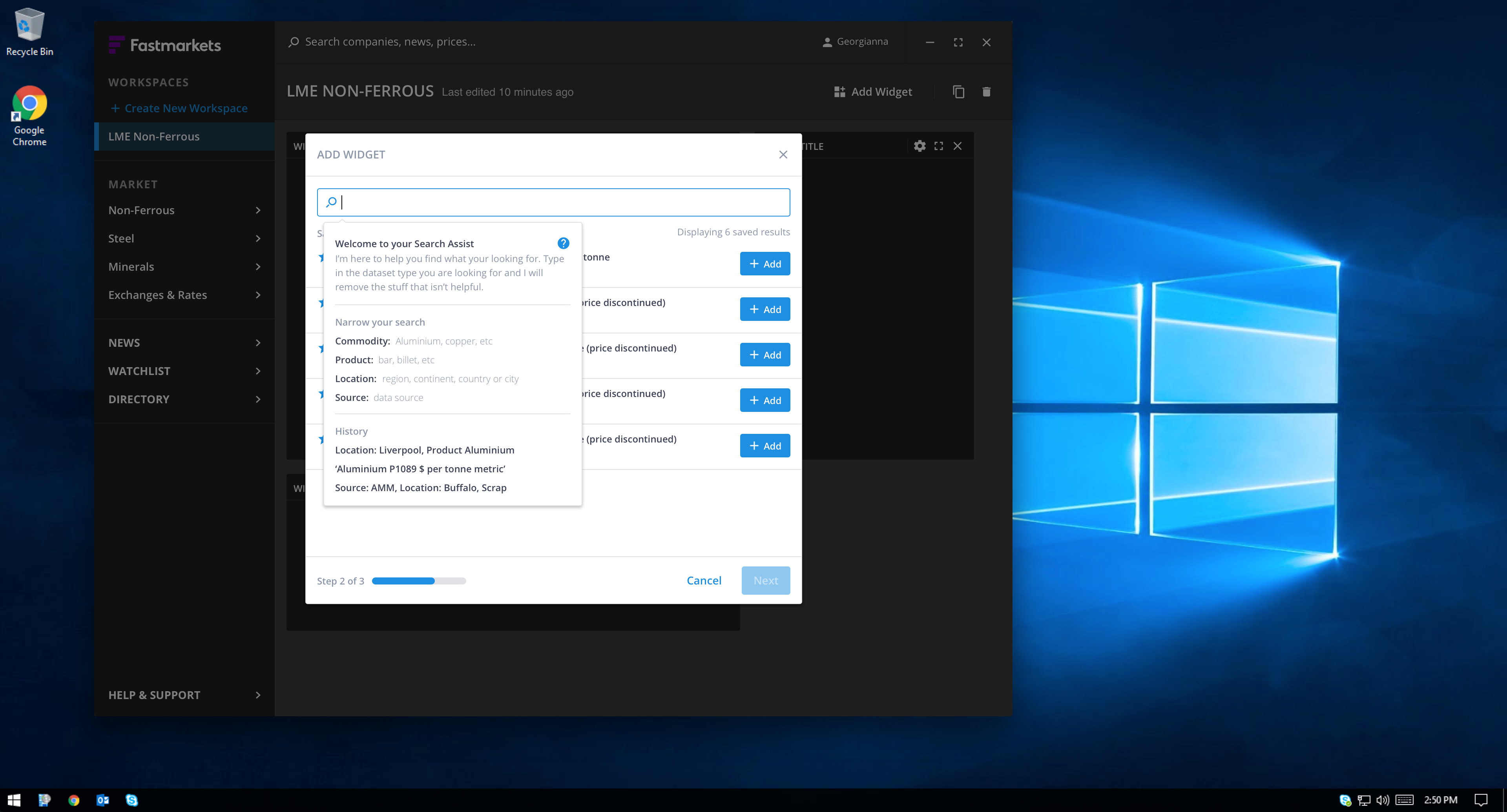